Beyond the Ballot: Labor

Labor is entitled to all that it creates. Our bosses take vastly more than their share, and have for hundreds of years. Luckily, we’re seeing a newly revitalized labor movement starting to push back: newly-militant unions in the public sector, mass action in the private sector, and new shops organized on a regular basis. What does the presidency have to do with all this?

The President appoints the chair of the National Labor Relations Board, among other positions. The NLRB was established in the 1930s under the pressure of massive labor unrest. It sets the rules for the struggle between workers and their bosses, and resolves dispute regarding unions. This puts it in a position of tremendous leverage: it wields the authority to crush unions or to empower them. Under President Trump, we’ve already seen it do the former. Imagine this power on workers’ side for once. 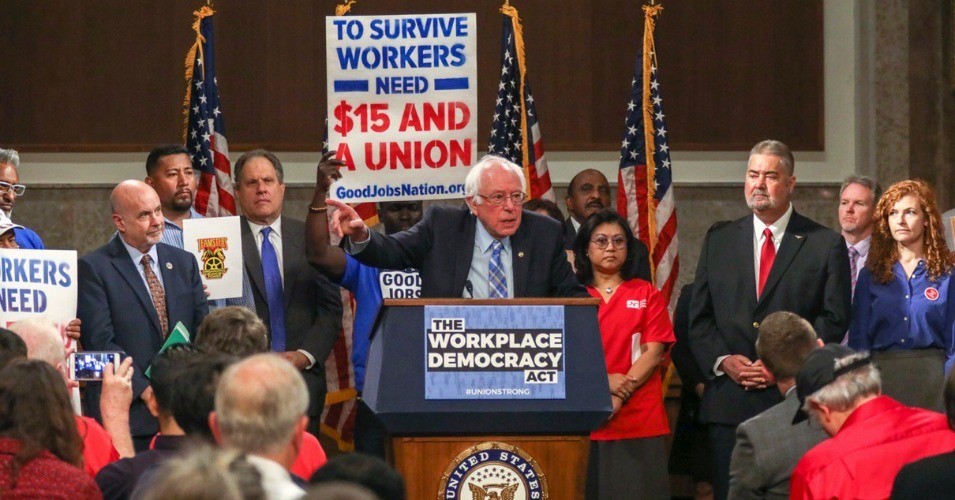 Bernie Sanders proposes to double union membership in the United States. This is one of the most striking proposals in Sanders’ platform, and would represent a dramatic expansion of worker power. However, perhaps even more interesting is his proposal to eliminate the ban on secondary boycotts. This sounds esoteric at first, but it’s a simple concept: currently, the United States is one of relatively few nations to prohibit workers up or down the supply line from one business from striking in support of workers at that business. Although clever workers have long found ways of working around this prohibition, it still prevents the sort of mass action necessary to make radical, substantive demands. The Workplace Democracy Plan is a broad and complex policy platform, and could potentially open possibilities for the labor movement not seen since the 1930s.

If you believe that workers deserve more than their bosses’ scraps, make sure you turn in your primary ballot marked for Bernie Sanders by March 10 (for those outside of Washington, find your primary or caucus date here). Remember to check the box for the Democratic Party, or your vote will not be counted! Ballots can be dropped off in election dropboxes until 8pm on March 10.

Olympia DSA works to support local labor struggles. Many of our members are active in their union locals and in the local labor movement. We also host a monthly Workplace Organizing Collective, where anyone can drop in and work to build the skills to organize their workplace. Whether you want to organize a union or just push back against your boss’ latest act of small business tyranny, our collective can help you get started and give you a chance to help others do the same. Check it out on the second Tuesday of each month at POWER in downtown Olympia!